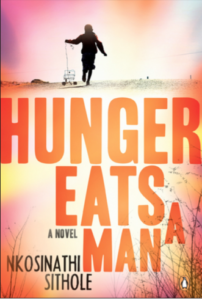 Meets a Man is the English meaning of Ndlalidlindoda, a village situated in the foothills of the Drakensberg, South Africa. The wealthier blacks live in Canaan, an area where the whites used to live and look down on those who live in the informal settlement of Ndlalidlindoda. The community struggles and still lives in extreme poverty with little chance of employment. The white farmers continue to exploit their vulnerability and there is no one to protect their interests.

The narrative follows the lives of several families as they wrestle with their circumstances. Many of them are a strange mixture of modernity and traditionalism, especially when it comes to belief. Furthermore, even in this rural community, there are divisions according to class, or perhaps it is rather that class is defined by wealth. Some have gained their wealth and position through corruption and do not want the poverty stricken to infiltrate their domain.

The characters are colorful and extremely passionate and the dark humor underscores the tragedy of life in this poverty-stricken community rather than trivializing it.