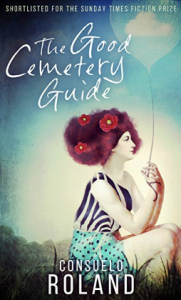 Anthony Loxton, reluctant third-generation funeral director by day, is by night Tony the Fox, a guitarist in the bars of Kalk Bay. It looks like there’s no escape from the burden of the past. But when Tony’s one-night stand, Lily, arrives in a body bag at the Loxton Funeral Parlour, he surprises himself by breaking his own rules.

As the boundaries separating the two worlds he has created for himself collapse, Anthony’s journey of self-discovery begins, accompanied by a cast of unforgettable characters. A chain of events takes him to the edge of tragedy and disaster and the back again. He discovers that the living are more fragile than the dead and that joy can arise in the most unlikely circumstances.

“..I am sorry it took me ages to get to it, but the wait was so worth it. Apart from anything else, the book includes a cast of unforgettable characters, including a Polish countess who came to Kalk Bay and became a “sea witch”.  Who can resist a character like that? Loved every page of it and wish there would be a sequel.” – Karina Szczurek, writer, publisher and literary critic, December 2019