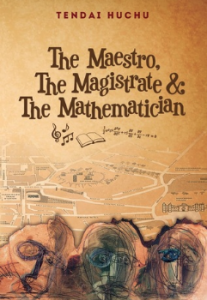 The Maestro, The Magistrate & The Mathematician is a story about three men living in Edinburgh, trying to find a place for themselves in the city. It’s a novel about ideas, music, memory, love, that kind of shit. (Huchu interview. Gyasi, 2015: n.p.)

There’s a great Spike Milligan line: “Everybody has to be somewhere.” (Huchu interview. Cousins and Dodgson-Katiyo, 2016: 201)

The Magistrate, the Maestro, and the Mathematician” is a dense novel. Set during the decade of crisis, the novel zooms into the too often agonizing life of Zimbabwean emigrants and also provides some valuable insight into the political and economic issues currently afflicting Zimbabwe.

In her column “It’s All Write” for Botswana’s Mmegi newspaper, author Lauri Kubuitsile said of the book.

“The three storylines might work well alone but are made more by being woven expertly into and through each other. The writing is beautiful, in places stunning. The descriptions of Edinburgh are from the pen of someone who loves that city and it can’t help but show through his words. There are many books about Africans in the diaspora, many books that appear similar after a while, but not this one. This one stands apart.”

parameters of the book