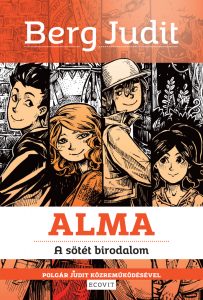 Alma intends to show the world of chess as it has never been shown before. The main characters of the book are four lost teenagers (Alma, Drifter, Felix, and Bella) who must face the evil Lord of Chess in order to find their way back to their own world. Alma is the first book in a series of four. Part 3 and 4 are in progress.

During the adventures, several chess riddles are to be solved by the main characters. These are deeply embedded in the dramaturgy of the novel: some riddles can be used as maps, others function as codes for secret doors or show the heroes which way to take.

The most exciting part of the book is the final battle between the protagonists and the Dark Lord of the Chess Empire. The movements of the two armies and the fighting itself make the whole chapter the dramatic climax of the novel.

However, this is not a randomly made up battle scene. The moves are identical with those in one of the famous chess games of Judit Polgar.

Chess players can follow the game step by step in the appendix of the book. On the other hand, it is not necessary at all for the readers to be chess players in order to enjoy the novel.

The other books in series:
1. Alma – about the World of Chess ( 2018)
2. Drifter – about Artificial Intelligence (2018)
3. Felix – about Physics and Chemistry ( expected)
4. Bella – about Animals and environmental protection (expected)

Parameters of the book