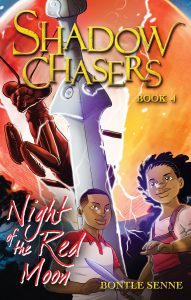 Night of the Red Moon is the fourth book in the Shadow Chasers series. It’s a fantasy adventure ̶ one part family saga, one part hero’s quest

It’s a race against time for the Shadow Chasers. Led by the General, an army of monsters is intent on destroying this world. The Shadow Chasers have discovered that if they defeat the General on the Night of the Red Moon, her army will sleep forever. As the minutes tick by, and the moon turns blood red, the Shadow Chasers are joined by the ancient god/Kaggen. But the General is the fiercest and most dangerous warrior of all… are their combined forces going to be enough?

The series are all a modern quest. They are fast-paste and each chapter ends in a cliffhanger. They are light and economical, geared towards getting children to read. The series is beautifully told and the characters are as complex as we all are.

Parameters of the Books: