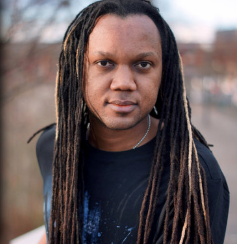 Huchu’s first novel, The Hairdresser of Harare, was released in 2010 to critical acclaim and has been translated into German, French, Italian, and Spanish. Huchu is a creative writing Ph.D. student at the University of Manchester and was shortlisted for the 2014 Caine Prize. In their review of The Hairdresser of Harare, The Guardian called him: “An unusually astute and unflinching writer.”

BOOK
The Maestro, the Magistrate, and the Mathematician