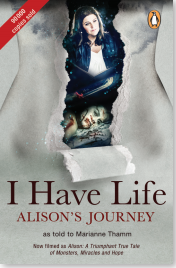 Like an apparition, conjured out of the darkness, a young man with light blond hair pushed his face into the car. I immediately spotted the knife. It was a long, thin weapon, almost like a letter opener, with a tapering blade. It felt cold and spiny as he pressed it to my neck. When he spoke his voice, which was quiet and controlled, sounded as though it emanated from a distant planet. But every word thudded into my skull. “Move over or I’ll kill you,” he whispered.

I Have Life is the triumphant story of a woman who refused to become a victim. The courage which allowed her to move beyond severe physical and emotional trauma and to turn a devastating experience into something life-affirming and strong is an inspiration to people everywhere.