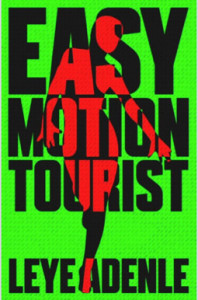 “Fast and furious, told from a kaleidoscope of different points of view, it’s a rollercoaster ride through a world of extremes, where everything is up for grabs.” – The Guardian – Laura Wilson, June 2016

Motion Tourist is a compelling crime novel set in contemporary Lagos. It features Guy Collins, a British hack who stumbles by chance into the murky underworld of the city. A woman’s mutilated body is discarded by the side of a club near one of the main hotels in Victoria Island. Collins, a bystander, is picked up by the police as a potential suspect. After experiencing the unpleasant realities of a Nigerian police cell, he is rescued by Amaka, a Pam Grier-

After experiencing the unpleasant realities of a Nigerian police cell, he is rescued by Amaka, a Pam Grier-esque Blaxploitation heroine with a saintly streak. As Collins discovers more of the darker aspects of what makes Lagos tick – including the clandestine trade in organs – he also falls slowly for Amaka. Little do they realize how the body parts business is wrapped up in the power and politics of the city. Easy Motion Tourist pulsates with the rhythms of Lagos, reeks of its open drains, and entertains from beginning to end.