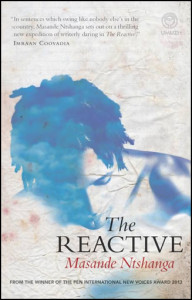 The Reactive tells the story of Lindanathi, a bright university drop-out who works a dead-end job at a video shop and runs an operation selling illegal pharmaceuticals in the suburbs of Cape Town with his friends Ruan and Cecelia. He is quietly tormented by the role he played in his younger brother’s death. Old wounds resurface when he is reminded of a promise he made to his family years earlier. Lindanathi has to decide whether to continue his life of avoidance and oblivion, or return to face what he has left behind, a decision influenced by the sudden appearance of a surreal masked man.

Rendered in lyrical, fascinating prose, The Reactive is a tale about confronting your past and discovering redemption in the most unexpected places. Ntshanga’s evocations of a not-so-new South Africa are original and striking. The Reactive is a well-wrought, haunting and, ultimately, uplifting novel.