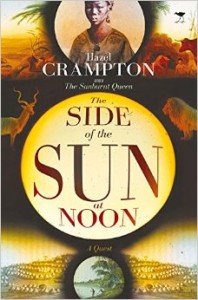 The Side of the Sun at Noon is a quest, a journey of discovery.

In the mid-17th century when the Dutch first settled at the Cape of Good Hope, built their fortress and began trading with the indigenous Khoikhoi, they were told of a mysterious people called the Chobona, who lived in stone houses deep in the interior of the country, were rich in gold and cattle and had long hair and pale skins.

Believing them to be the people of Monomotapa, the legendary south- ern African empire from whom the Portuguese obtained their gold, the Dutch made every effort to reach them. “Volunteers” were select- ed, plans drawn up, maps supplied and expedition after expedition dispatched. None succeeded in finding the elusive Chobona.

In the centuries to come historians would dismiss the Chobona as fan- tasy, blaming the stories on what they believed to be the over-active imagination of Eva, a young Khoikhoi girl who was the Dutchmen’s main interpreter.

Yet the rumours never ceased. And, as our knowledge of the past has grown, so too has the possibility that the rumours were real.

The Side of the Sun at Noon explores the truth behind the rumours, following in the footsteps of the early explorers in what is an innova- tive and engaging interweaving of a rich array of sources, from ancient Arab writings and indigenous oral traditions, to contemporary his- torical documents and modern archaeological discovery.

This book makes you challenge the accepted notions of our history – making you look, and look again.