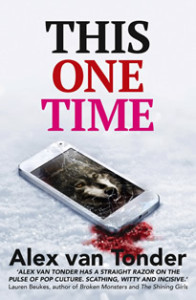 Superstar blogger, Jacob Lynch, AKA Brodie Lomax, has 11 million followers and his own reality show. This unlikeable protagonist is also known as Mr. Misogyny and that Sex-Tape Guy. His life is a crazy mix of drugs, sex and being seen in all the right places.

With the renewal of his reality TV show as well as his eight-figure book deal, life is good for New York’s most notorious blogger. But he’s suffering a serious bout of writer’s block, and the distractions of endless parties, drugs, and meaningless sex are not helping.

He flees to an isolated hunting lodge in Alaska to write. When the mysterious beautiful Alicia emerges unexpectedly from the snow, he knows he shouldn’t get involved. The nest day he wakes up chained to a bed, and that’s when things turn for the terrifying.

“ This One Time by Alex van Tonder can be classified as a pseudo-modern thriller that makes Jim Carey’s The Truman Show look like kindergarten recess.” Goodreads

“Alex van Tonder has a straight razor on the pulse of pop culture. Scathing, witty and incisive.” Lauren Beukes Bookslive.co.za