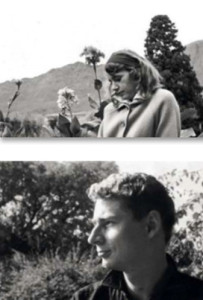 Ingrid Jonker (19 September 1933 – 19 July 1965) was a South African poet. Although she wrote in Afrikaans, her poems have been widely translated into other languages. Ingrid Jonker has reached iconic status in South Africa and is often called the South African Sylvia Plath, owing to the intensity of her work and the tragic course of her turbulent life. Her work has also been compared to that of Anne Sexton. During the night of 19 July 1965, Jonker went to the beach at Three Anchor Bay in Cape Town where she walked into the sea and committed suicide by drowning.

Nelson Mandela read one of her poems, “Die kind (wat doodgeskiet is deur soldate by Nyanga)” (“The child (who was shot dead by soldiers at Nyanga)”), in Afrikaans, during his address at the opening of the first democratic parliament on May 24, 1994.

André Brink is one of South Africa’s most distinguished writers. Playwright, novelist, essayist and teacher, he is the author of over twenty works of fiction. An Instant in the Wind (1976) and Rumours of Rain (1978) were both shortlisted for the Booker Prize. The Other Side of Silence (2002) won a Commonwealth Writers regional award for Best Book in 2003. He has been made a Commander of the Order of Arts and Letters and awarded the Legion of Honour by the French government. In 1992 he was awarded the Monismanien Human Rights Award by the University of Uppsala for making known the injustice of apartheid to the wider world. In 2009 he published his memoirs, A Fork in the Road. – Brink died February 2015

Flame in the snow