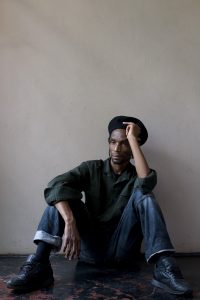 Born in Orlando West, Soweto, in Johannesburg, Lesego Rampolokeng is a poet, novelist, playwright, filmmaker, and teacher who rose to prominence in the 1980s, a turbulent period in South Africa’s history. Since his debut Horns for Hondo (1990), he has released several pioneering collections of poetry including Talking Rain (1993), The Bavino Sermons (1999), The second chapter (2003/5), Head on Fire (2012) and most recently, A Half Century Thing (2015). His anthologies Blue V’s: Rap-Poems (1998) and End Beginnings (1998) have been translated into German. He is also the author of two novels and two plays and has written screenplays and released several audio recordings, including a collaboration with the Kalahari Surfers. His documentary film Word Down the Line debuted in 2014. His third novel Bird-Monk Seding (2017) was shortlisted for the 2017 Sunday Times fiction prize and won the 2017 University of Johannesburg Fiction prize. He is currently engaged in a PhD on the prose and poetry of the seminal black consciousness writer Mafika Gwala. at Rhodes University in Grahamstown, South Africa.