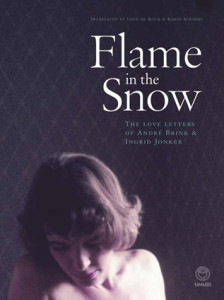 ‘After 50 years, the truth about SA’s most famous literary romance is revealed” – SUNDAY TIMES, SA

In a telegram dated 29 April 1963, thirty-year-old Afrikaans poet Ingrid Jonker thanks André Brink, a young novelist of twenty-eight, for flowers and a letter he sent her. In the more than two hundred letters that followed this telegram, one of South African literature’s most famous love affairs unfolds. Jonker’s final letter to Brink is dated 18 April 1965. She drowned herself in the ocean at Three Anchor Bay three months later.

In December 2014, three months before his death on 6 February 2015, André Brink offered these never-before-seen letters, as well as personal photo- graphs, for publication.

“Don’t, for God’s sake, Ingrid, go ahead with what you wanted to do in Jan [Rabie]’s house. I don’t have, nor do I want, any reasonable grounds to persuade you. Perhaps I’m urging you purely for my own selfish considerations. But don’t. You should still ‘make’ poems like ‘Begin somer’, ‘Dood van ’n maagd’, ‘Bitterbessie dagbreek’, ‘Art poétique’, the series ‘In- tieme gesprekkies’; and we should again ‘make’ that which you can’t ‘make’ in Afrikaans: love.”

“Do you think it wise to visit Bartho [Smit] and Stephen [Etienne le Roux] together (the two of us together)? In any case, I won’t stop you – I’m just interested! Because when I re- ceived your beautiful letter, I treated the matter as a hot top secret. To date, Juliana Bouws is the only one who knows – I had to tell someone !”