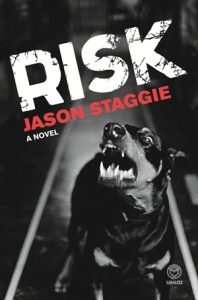 Nelson Jekwa: young, black, privileged. Named after Mandela, his future blinks promisingly, but remains tantalizingly out of reach. When chasing women and hunting highs seems to be losing its appeal, Nelson and his friends decide to play a game of risk. The rules are simple: “What are we doing? We’re going to go on missions that we draw from a hat. Risky missions. Risk, that’s all it is.” But what starts off as some edgy fun, evolves and mutates, spawning a social movement that spans the continent. The goal: to help Africa get out from the bottom of the world’s toilet. While the missions being executed become increasingly illegal, immoral and irredeemable, Nelson’s group plans ten heists to help pay back Africa’s debts to the West. But their game, and its consequences, has spun out of control.

NOMINATED FOR BEST YOUNG WRITER AT THE SALA AWARDS 2014